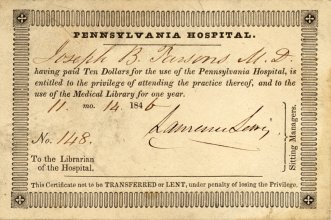 Library card dated Nov. 14, 1846 for the Pennsylvania Hospital Library, the oldest medical library in the United States. It was founded in 1762. 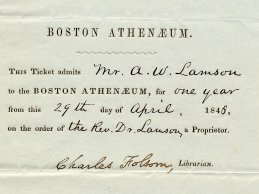 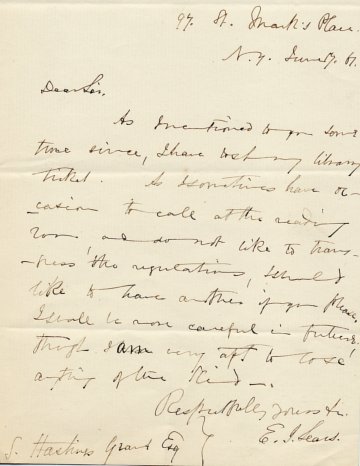 This letter was written by Edward I. Sears on June 7, 1861 to S. Haskins Grant, Librarian of the New York Mercantile Library from 1849 until 1866. Sears was a well known writer and editor of the National Quarterly Review. In the letter Sears writes: “As mentioned to you some time since, I have lost my library ticket. As sometimes have occasion to call at the reading room, I do not like to transgress ‘the regulations,’ I would like to have another if you please. I shall be more careful in future. Though I am very apt to lose anything of the kind.”  This letter illustrates that a library card or ticket was an essential ingredient to any substantial library's charging or circulation system. At the time the New York Mercantile was using a ledger system, the predominant charging system for libraries up to the 1850s.  This system, however, was not satisfactory for an active library.  Just prior to Grant's resignation as Librarian of the New York Mercantile Library, the library implemented a temporary slip system.  The lending transaction was recorded on the slip instead of a ledger, and the slip was disposed of when a book was returned.

Front and back of an 1868 library ticket (card) for the Young Men's Mercantile Library Association of Cincinnati. 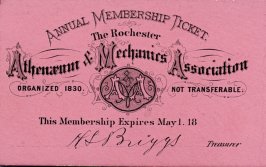 Front and back of an unused 1876 library card for the Rochester (NY) Athenaeum & Mechanics Association. 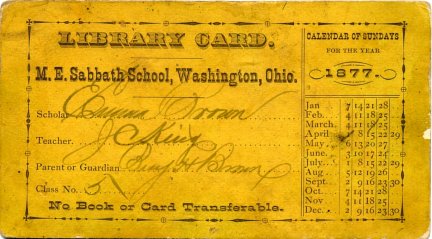 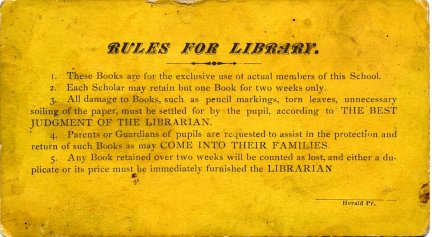 Back of card above. 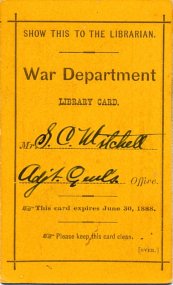 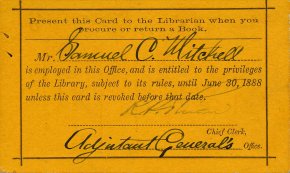 A library card for the War Department Library expiring on June 30, 1888. 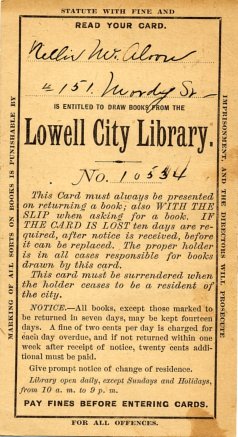 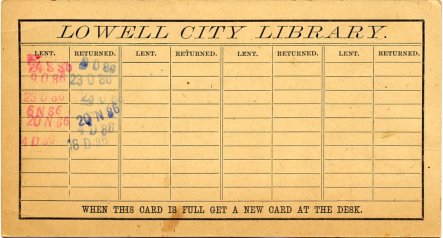 A library card for the Lowell City Library in Massachusetts used in 1886. The card states: "Marking of All Sorts on Books is Punishable by Statute With Fine and Imprisonment, and the Directors will Prosecute". They didn't mess around. 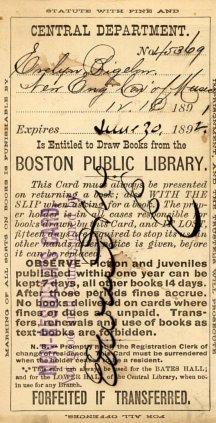 A library card for the Boston Public Library expiring on June 30, 1892.

This card includes only the holder's number. 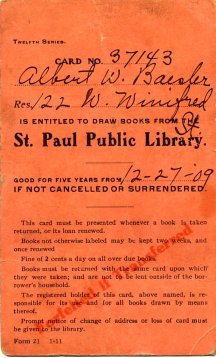 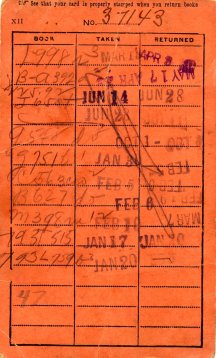 Front and back of a 1909 library card for the St. Paul (MN) Public Library. 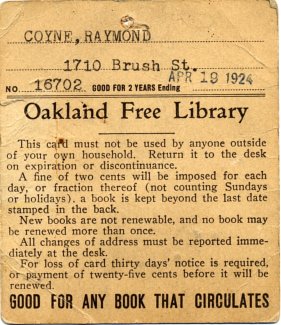 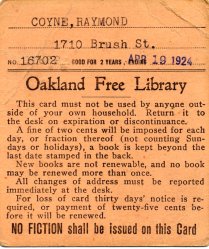 Two library cards for the Oakland (CA) Free Library for the same person that end on April 19, 1924. One card is "Good For Any Book That Circulates" and "No Fiction shall be issued" on the other card. Don't quite understand why there is a need for two. 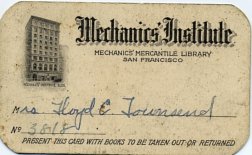 Library card for the San Francisco Mechanics' Institute Library.  Date of issue unknown but probably in the 1920s or 30s. 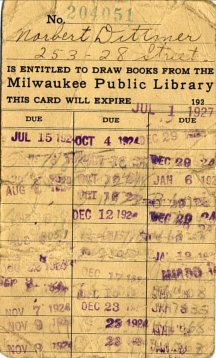 A well used library card expiring on July 1, 1927 for the Milwaukee Public Library. 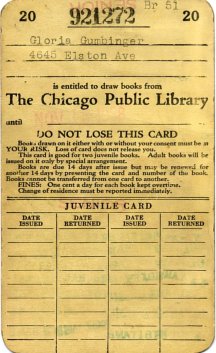 Library card for the Chicago Public Library used in the 1920s. 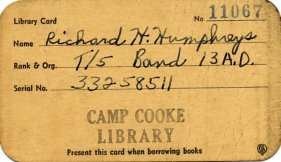 Library Card for Camp Cooke (Texas) Library circa World War II.  The Army's 13th Armored Division along with other armored and infantry divisions was trained at Camp Cooke. Army libraries were a legacy of the American Library Association's Library War Service in WWI. 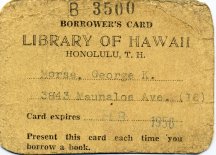 Library card for the Library of Hawaii in Honolulu, Territory of Hawaii expiring in February, 1956. 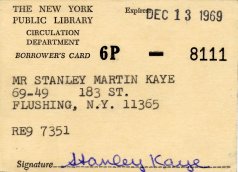 To see some more current library cards with a personal connection CLICK HERE.