Libraries were a common subject for souvenir china. In the early 20th century when Andrew Carnegie and others were helping communities build hundreds of new libraries, those buildings became objects of civic pride.  Local community stores (general stores, jewelry stores, gift stores) would arrange to have souvenir items of community landmarks, including libraries, made for resale in their stores. Most of the library china was made by companies in Germany or England.  The quality of the china and the processes used varied.  The poorer quality items just involved the transfer of an image design to the item, and the same image was used on many different items (cups, plates, etc.).  Some items were of higher quality and were hand painted. 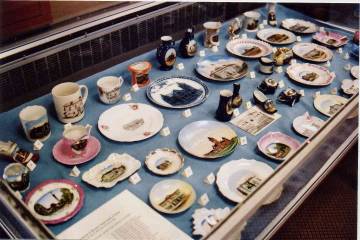 Exhibit of of Wisconsin library souvenir china from my collection at the Baraboo (WI) Public Library at a celebration of the 100th anniversary of the Carnegie library building (2003) in which it is housed. 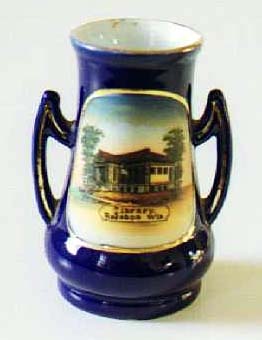 This piece of souvenir china depicts the Baraboo (WI) Public Library. It is less than 3 inches high. 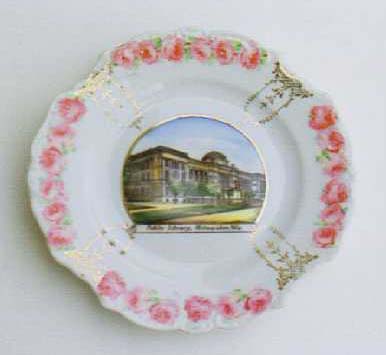 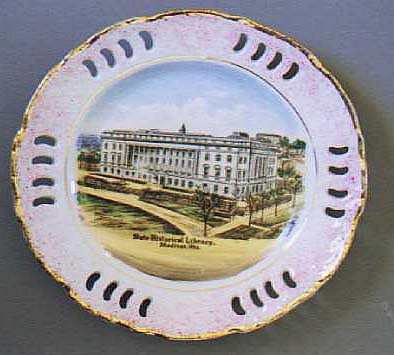 The Library of the Wisconsin Historical Society is depicted on this souvenir plate.  A ribbon was woven through the holes in the plate when it was displayed.

Most of the items in my collection of souvenir china were included in an exhibit at the Menomonee Falls Public Library in 2006.