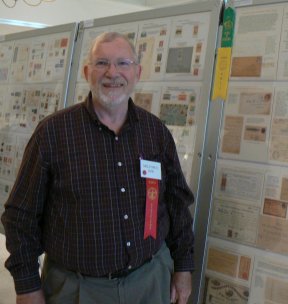 In 2003, I started exhibiting portions of my collection of  postal librariana at stamp shows. I have usually exhibited at two or three of the World Series of Philately Stamp Shows each year. These shows are sanctioned by the American Philatelic Society (APS).  Exhibits at these shows are evaluated by a panel of judges certified by the APS. I normally exhibit in the Display Division which allows the inclusion of of some artifacts that are not postal in nature. Exhibits are placed in frames (see photo to the left) that hold sixteen 8 1/2" by 11" pages.  Exhibits can range in size from 1 frame to 10 frames.

My first exhibit was a 10 frame display exhibit entitled "The Story of America's Libraries". The latest version of that exhibit is entitled titled "America's Public Libraries and Their Forerunners 1731-1956". To see the awards received by that exhibit click HERE.

"America's Library - The Library of Congress", 8 frame display division exhibit
Shown for the first time at StampShow 2010 in Richmond as a 10 frame exhibit where it received a Silver Award. After revisions and a reduction to 8 frames, the exhibit received a Gold Award at the 2011 the St. Louis Stamp Expo. It also received the award for the Best Display Division exhibit at St. Louis. It also received a Gold Awards at the National Topical Stamp Show 2011, at MILCOPEX 2011in Milwaukee, and at CHICAGOPEX 2011. It received a Vermeil Award at NAPEX 2011 in the Washington, D.C. area.

"America's Philatelic Libraries and Museums", 3 frame display division exhibit
Shown non-competitively at the Rocky Mountain Stamp Show in Denver in 2009 and at AmeriStamp Expo 2010. I also have a one frame version of the exhibit titled "The American Philatelic Research Library".